We continue today with reading through The Parents’ Review [1890] Vol 1, No 4.  I’m quite excited about today’s entry — it’s not an instructional piece, but rather reader submitted book recommendations!

(Not sure what a living book is?  Read this post for my explanation)

(Disclosure: This post probably contains affiliate links. If you click through and make a purchase, I may receive a small commission at no extra cost to you.)

The first recommendation is for Uncle Remus books by Joel C. Harris.  These are apparently the “original” ones, or perhaps I should say the first ones published.  They are available free online at Project Gutenberg

I love that the Parents’ Review points out the objection that the dialect is hard to read.  “The answer to this is — Read the tales aloud, and the dialect becomes easy and natural.”

For a wonderful, modern retelling of Uncle Remus, look for Uncle Remus: The Complete Tales by Julius Lester and illustrated by Jerry Pinkney

The next set of books is recommended by a different reader, and these too are American books.

A set of Reading Books “Seaside and Wayside,” in three volumes, by Julia Wright…is perfect , because its aim is to present facts in simple short Saxon words, and give  living  teaching;  thus I found it evoked a real interest in reading in a child of nine, who simply could not and  would not read from the “Primers” generally used. This interest has never flagged, but gone on increasing in the most satisfactory way.

I was delighted to find that two of these three volumes are still in print, but not under their names of Seaside and Wayside.

No, they are now Books 2 and 3 of the Christian Liberty Nature Readers!

Don’t believe me?  Take a look at the copyright pages  (if it doesn’t show for you, click “View Sample” towards the top)

These two books of the Christian Liberty series were my own daughter’s favorites.  After these, she lost interest. I’d thought it was simply changing tastes as she grew older, but now I wonder if it was the change in author.  I hadn’t realized before this that the Nature Readers aren’t all written by the same person.

A word though — as you can tell by the series title “Christian Liberty Nature Readers” the author does come from a Christian perspective. They are not “young earth creationist” (at least not these two books), but you may see an occasional reference to “God’s plan”, or wording similar to that. They are not overbearingly Christian and they don’t seek to convert, but it’s something to be aware of if it’s an issue for you.

They are also in public domain and available through both google books and archive.org, as well as two more books in the series.

I have not read any of these, except for the Christian Liberty Nature Readers, so I can’t vouch for language or attitudes.

But I am so thrilled to know that we still have access to these books that were enjoyed by children generations ago! 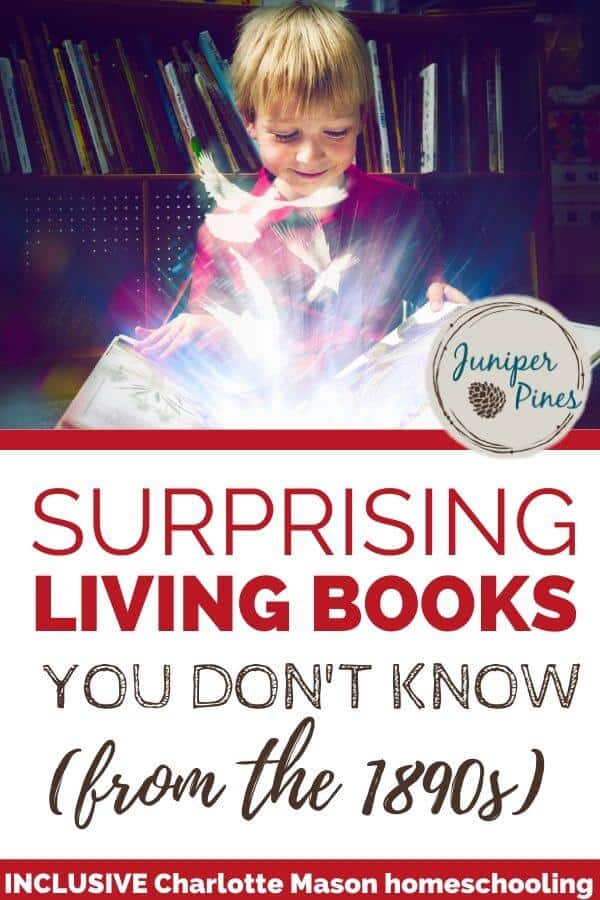 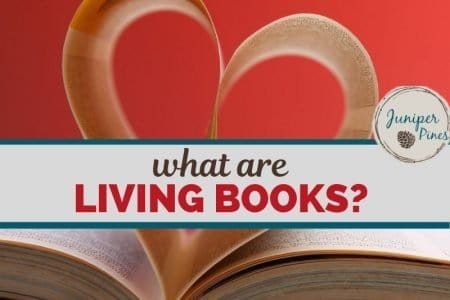 One of the most frequently asked question by those new to Charlotte Mason is, “what exactly is a living book?”

What does that term mean?

How do I know if a book is living?

When I first started learning about Charlotte Mason through curricula that billed itself as CM (but actually wasn’t), and reading blogs here and there, I developed the idea that living book meant historical fiction.

Other places I’ve seen people say that a living book is wrapped in a fictional story, or any book that ‘draws a reader in’ is living.

This leads to the erroneous conclusion that all you have to do to make a bunch of facts into a living book is to write them in a fictional story, or even that junk-food type books that kids love (Junie B Jones, Magic Treehouse) are living books.

But just because a child loves a book doesn’t mean it’s a living book.

My definition of a living book

Here is my own short definition:

A living book is a book of literary quality, often written for a popular audience by a single author (sometimes two) who is passionate about his subject.  It transmits ideas rather than just facts, and feeds the mind.

I think we should start here — by definition, a living book is a book.  Not a movie. Not a youtube video or documentary. Not a radio production or a video game.

A living book is a book.

This does not mean… ‘anything wrapped in a story shell.’

…It doesn’t mean any book that is narrative.

…It doesn’t mean any book that ‘draws a child in.’

It is a book of literary quality.

It is a book that you as an adult love to read as much as your children do, because the quality of the writing is excellent.

I will say the same thing about a living book.  If you don’t enjoy it as an adult, if it is a pain to slog through because the writing is so stilted or written on such a low level, it is not of literary quality.

Not a book written by committee.  Not a textbook. Not meant for ‘educational purposes only.’

This is a book that is written with such passion and joy, and written so lucidly, that everyone can enjoy it.

It is not a lecture that has been written down.

If you open up a book, read a few pages, and would never think of reading it if you weren’t required to, then put it back.

Have you ever known a person who you could listen to them talk for hours, no matter the subject, because they had such a way with words that listening was a delight?  Or that was able to transmit their enthusiasm and draw you in to their subject even when you had no prior interest in it?

Or that could take anything and wrap it in a story of personal anecdote so skillfully that you hardly even realized you were learning because they were such a joy to listen to?

That’s what you want out of a book.

You want a book that grabs you by the collar, pulls you in, and won’t let go, even if you have no prior interest in the subject.   Because the author writes so well.

This is a harder one to define.  Ideas. But let’s take a look at some books that just transmit facts and pull kids in, for comparison.

The most common style of books you’ll find in the non-fiction children’s section these days is the DK Eyewitness style.  They are not all published by DK, but they share the style.

Now, look at a page of this book.  Take out all the pictures, and just leave the text.  Since there are often text boxes scattered all over the page with one or two central paragraphs, you’ll need to mentally draw those odd pieces of text together.

Now read through it, without the pictures.

Does it flow?  Is it beautiful?  Does it draw you in?

Or is it choppy?  Clunky? Does it read like a list of facts for a 4th grader’s book report?

I’m going to write a few pieces from my daughter’s favorite book about bugs here, so you can see what I mean.

California oak gall wasp.  This type of wasp lays her eggs in oak leaves.  Blue-black spider wasp. The spider wasp catches spiders to feed her young.  Giant hornet. Like the yellow jacket, the hornet is a wasp with a powerful sting.

Then we move into some more interesting text, also scattered around a large drawing of a wasp:

The bright colors of the wasp probably acts as a warning to its enemies–keep away or else.  When a creature such as a bird attacks a wasp and gets stung, it learns to link the black and yellow stripes with the painful sting.  This makes it less likely to attack another wasp. The wasp’s antennae are covered with tiny hairs and are highly sensitive to touch and smell.  The antennae may also detect changes in temperature and humidity.

But do you see here?  It’s all just fact after fact.    There’s no … personality.   It’s like listening to someone read from an encyclopedia entry.

If it weren’t for the large drawings and pictures over every page, my child would not be interested at all.

Pictures should enhance the text, not make it so the text is bearable!

Living books can be fiction or non-fiction.  They can be historical fiction, they can be non-fiction wrapped in a fictional story.

They can be classics (20 years old or more) or newly published.

But just because a book is fiction, or historical fiction, or wrapped in a fictional story, does not necessarily make it a living book.

The litmus test is not whether or not it’s told in story form.

The litmus test is if it is literary quality and transmits ideas rather than just facts (food for the mind).

When you evaluate a book, is the quality so high that you want to save it for your grandchildren or even great-grandchildren?

If so, it’s probably a living book.

Want to remember the post What is a Living Book? Pin it to your favorite Pinterest board! 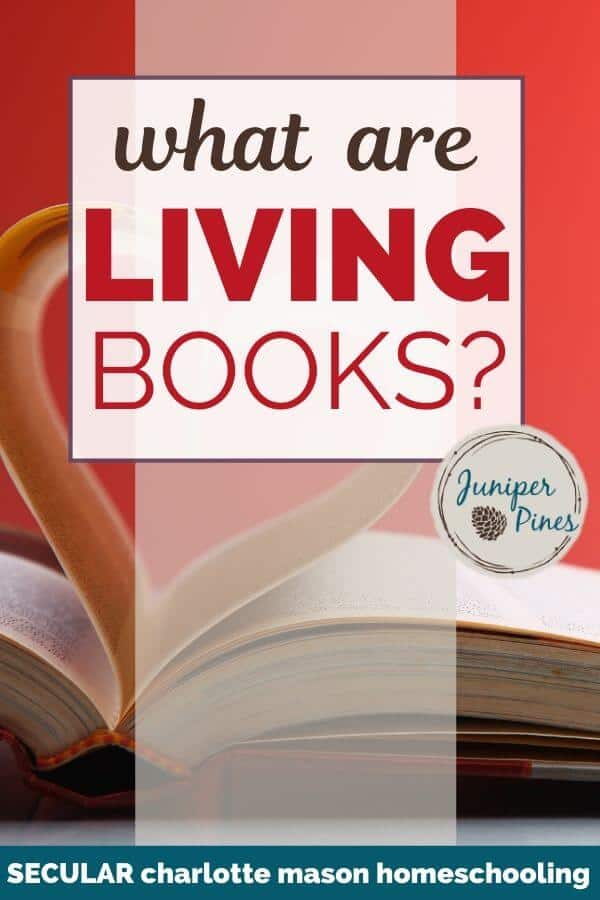